I was given two weeks off by my employer for the holiday season. Due to Beckett’s health, I have spent three whole days outside of the hospital. The family/home situation has been a little tricky and so Kim has spent a majority of the hospital time at home with Adalyn and Raemee. It has been such a blessing for them to have their mother around. I think it has helped them feel ok about their brother being gone.

While being alone with Beckett I have experienced some of the best moments of my life. Quickly followed by some of the hardest. I have learned things about my son that I probably never would have paid much attention to. His development in some areas are prohibited and yet he is shining in others. He has found his

hands and his mouth during these past two weeks. He keeps me on my toes as he grabs all the wires and tubes attached to his body. My favorite is when I put my face close to his, he will reach up from his hospital bed and start to run his fingers and palms over the skin of my face. He does it so gently, inspecting every little part of me, and then will occasionally stop at my nose and squeeze. It makes me laugh every time and turns my insides gooey. I love the feel of his soft skin and scrawny fingers as he explores my facial features.

As I look over him peacefully sleeping, I am overwhelmed with feelings. Feelings of all kinds. Feelings I have never felt before. I have so many wishes. Wishes for Beckett. Wishes for our family. I am conflicted. I feel in over my head. I feel more love than I thought was ever possible to feel. I have to go back to work tomorrow and it pains me to leave my lil buddy’s side. Since our first child Adalyn was born I have bonded deeply with my girls. Yet, there is something different about Beckett. It is almost like, I can’t take his battle away from him, but being by his side makes me feel like I am fighting it with him. I want to spend every possible minute with him. The reality of Beckett’s possible future haunts me and I don’t know how to properly manage my feelings with what I have to do and am personally responsible for. Which is go to work and bring home the bacon. 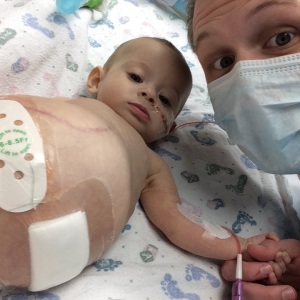 I keep telling myself that if I don’t go to work, Beckett has no chance for survival. His battle would be over without our insurance and income. Does that mean our battle fields are changing? Can I still a member of Beckett’s army but can no longer fight by his side? He stays and fights in the hospital and I take the fight to the office? The weight is setting in and I realize that I have to bite the bullet. There is strategy in battle and a war is never won on a single battlefield. Some battlefields however may be the turning point of a war. Losing on the financial battlefield would absolutely be the turning point for Becks and our family. As I leave my general’s side, I know that this is the fight that must be fought. It’s a fight against my emotions. It’s a fight for survival. It’s a fight because I love ya Beckett! I’ll be back fighting by your side just in time for the weekend.