Certain smells, sights and sounds can bring back memories. The smell of chocolate chip cookies baking reminds me of my mom and coming home from school, or the smell of certain colognes remind me of high school. Rain reminds me of nights in my room with the window open, soaking in the smell and sound and feeling peaceful. But over the past year, Shawn and I have noticed lots of similar triggers that bring back not so great memories. Some that literally send us into a panic. We will be watching a TV show and if there is beeping both of our hearts start to race as we worry that Beckett’s pump is going off only to realize that he doesn’t even have a picc line or feeding tube anymore. I instinctively want to pack a bag the night before we have clinic because seeing Clinic in my planner triggers memories of being admitted to the hospital every clinic visit for almost a year. And yet we haven’t been admitted to the hospital in over 9 months. And one of the most vivid ones for me is certain types of soap because the smell instantly transports me back to the hospital.

It’s been an amazing year and we have only had minor bumps and bruises and I still kept wondering why I would have such hard days and painful memories. We were always able to push past but they were still there. I even struggled through this latest pregnancy. I tried not to think of the baby growing inside of me. It was a defense mechanism. I was trying to protect myself from getting hurt. But I digress. To really understand what I’ve been feeling, I need to back up. To almost 2.5 years ago…..

After we had Beckett, literally minutes after, when we were sitting in the hospital room holding our new little son, 2 months before we even knew he was sick, Shawn and I had a very strong impression. We started talking about baby number four. Now I had just given birth about 3-4 hours earlier so this was seriously crazy talk. But neither of us felt it was odd at all. We just knew that there was another baby for us. We talked about possible names and what gender we thought this other baby could be. Crazy right?!? Looking back, I truly believe that this was a tender mercy from my Heavenly Father. He could see our path and knew I would be terrified and so he gave me strong feelings to help me stay where he wanted me to be. I’m not sure if I would have tried for another baby after Becks if I hadn’t felt so strongly about it before he was diagnosed.

Although there has never been any indication that his disease is genetic, it’s hard to not let your mind go there. After we conceived, I worried and prayed about this baby. Then I did the opposite and just pretended that this whole situation wasn’t happening. I made myself busy and some days truly forgot that I was pregnant. I can’t get hurt if I don’t get attached. I did not want to again go through what we did with Becks. We found out we were having a girl and chose her name. Finley. But still when I prayed, I didn’t use her name. I didn’t want to get attached. Now I was still excited to be having a baby, I was just afraid and so I distanced myself from her.

November 29th came and this beautiful little girl came rushing into the world. 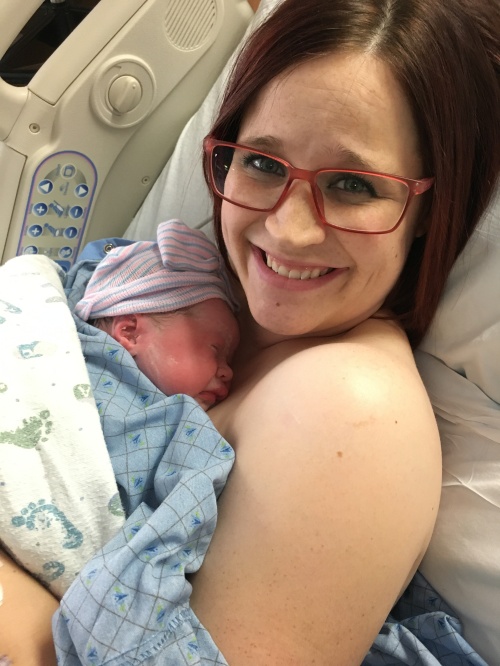 I was in labor for only 4 hours. After 2 hours of intense contractions, we headed to the hospital and I had her 2 hours later. I didn’t even push, she just came right out. It was the first time I didn’t get emotional when they handed her to me. I didn’t cry. I just felt shocked. No matter how much you pretend to not be pregnant or try to push it from your mind, once that baby is here, it’s REAL. I held her and looked at her. Then the nurse mentioned that she was having a bit of an issue breathing and that’s when it hit. The emotions came rolling out of me. I was crying, feeling such intense love for this little person. I kept asking if she was ok and they suggested skin to skin. After several hours of this, her breathing was much better. She never had to go to the nursery, and they never had to call anyone to come check her out.

It’s now been a month since Finley was born and she is healing me. Bits of my soul and my sanity are piecing themselves back together and I’m feeling whole for the first time in a long time. I felt like I was robbed of so much of Beckett’s babyhood and Finley is showing me that it’s ok. It’s ok to love fiercely and deeply no matter what we’ve gone through. It’s ok to open yourself up to pain because you never know what will happen. I’ve been so afraid of getting hurt, I check Finn’s poop religiously to make sure it’s the right color and am constantly asking Shawn if she is looking jaundiced. But in opening up my heart to her, I am filled with so much love and joy. She is a light. She is peace. She reminds me of all the good in those around us. I’m learning to not freak out at every little sound that reminds me of the hospital. I’m letting myself forget. I’m letting love win.