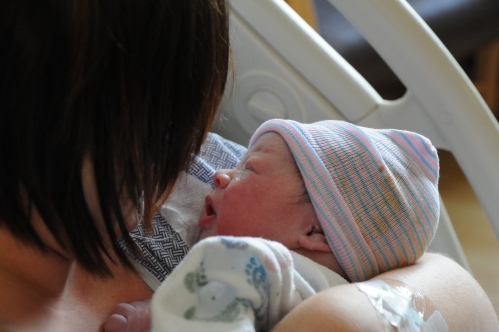 I need to start at the beginning. The birth of our sweet little son Beckett. I found out I was pregnant around Thanksgiving. I was super excited but also nervous because we hadn’t been trying for very long and it caught me a little off guard. Again our kids would be super close. We went in for our first u/s and found out I wasn’t nearly as far along as I thought I was. My due date was pushed back a couple weeks to August 10th. We decided to wait until Christmas to tell our families. We took a picture of our two girls Adalyn and Raemee holding up our u/s picture of our future child. We gave the picture of the girls holding the u/s photo to our parents. I loved it and it was fun to see the reactions as our parents took a second look at the picture and it dawned on them what it meant!

We went in at 16 weeks for an early gender test. I just couldn’t wait. We didn’t care one way or the other which gender this baby was but we were dying to know. It was glaringly obvious that we were having a BOY! Oh my, I was so excited. We immediately went and bought a few outfits for our little man cub. Shawn was nervous at first but the more he thought about it, he got super happy for a son.

This pregnancy was so easy. I was still sick the first trimester but it came and went versus feeling sick constantly. The only thing that was hard was I couldn’t eat sausage! It made me so sick. Second trimester was a breeze and third was tough but manageable. I got super uncomfortable once I got large but he moved great and I still had pretty good energy. He was such a sweet baby, even inside of me. He would move gently, never kicked super hard. If he pushed out, I would push back and he would push my hand. Not hard but he would push out. It was so fun!

I thought for sure that I would go into labor around 38 weeks just like I did with the girls. But nope, I kept having false contractions but it never would turn into anything. I had scheduled an induction date with my OB for August 4th. Even up to that day I had tons of contractions. We tried walking, spicy food, the works, and nothing. So I went to my last appt and we decided to move forward with the induction. We were told to come to the hospital at 7 am on August 4th and we would start everything. I had a hard time sleeping the night before knowing that I would be seeing my boy.

We showed up at the hospital just after 7 am and got changed into my gown and got situated with an IV. I had to have meds because I tested positive for GBS. After about 30ish minutes I asked for my epidural and was able to get the epidural at the same time that they got me started with pitocin. They also broke my water. My doctor sat on the bed and broke my water and I couldn’t believe the gush. This is my third time and I’ve never felt that big of a gush that lasted so long. My doc hurried and got up and was frantic trying to get more towels. It was so funny. At this point I was about 4 cm dilated. My doctor told me he thought I’d be having this baby around 2ish. Then he left.

After we got situated with everything, I started getting the shakes from the epidural. That was annoying. I couldn’t stop shaking!! We just hung out talking and laughing and waiting. I don’t know what it is about having a baby but the wait goes quickly! Around 10:30 my nurse came to check and see how we were doing and to turn down my pitocin because my contractions were coming too fast. She checked me and I was at 7 cm. Awesome! We were making good progress. She told me she’d come check on me in an hour but if I needed her before that, to call her. About 15 minutes after she left, I started to feel pressure. I mentioned it to Shawn and he suggested calling the nurse but I felt like it was too fast. There was no way it was true pressure. So we waited a few contractions. I was about to call her in when she came in to turn the pitocin down again. I told her I was feeling pressure and she checked. I was complete!!  She hurried up and called the doctor in and we got ready to push. I pushed for about 5 minutes and out came my beautiful baby boy! I couldn’t believe it happened so fast. 3 1/2 hours from start to finish!

Beckett Oliver born August 4th, at just after 11:00 am. 8 lbs 7 oz, 19 1/2 inches long. Such a cute, cute boy! We had the girls come up to see their new brother. They were enthralled and immediately started to kiss and love on him. Oh how happy it made me to see all three together!! We are so happy that this sweet little man has joined our family!!